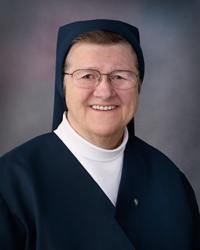 At 80 years old, Sister Alice Marie Quinn is at the helm of the largest privately funded Meals on Wheels program in the country that serves 3,500 meals a day to the impoverished homebound – most of whom are elderly and live alone.

Working six days a week, with a staff of 75 employees and 300 volunteers, Sister Alice Marie is the founder and program director of St. Vincent Meals on Wheels. She runs the entire operation, which involves planning and distributing nutritious menus for some of the most vulnerable people in Southern California. These clients would go hungry if it weren’t for Meals on Wheels, and for many of them, the daily food delivery is the only time they interact with another human being.

“St. Vincent always said to treat the poor with dignity,” Sister Alice Marie said. “The major reason we do Meals on Wheels is so our clients can stay at home and be independent as long as they can. Nobody wants to go into a nursing home until it’s necessary,” she continued. “We keep them at home and do for them what we ourselves would like done for us.”

Although the program has helped hundreds of thousands over the years, Sister Alice Marie refuses to take any credit. Instead, she credits God for putting her in the right place – and for bringing in all the components to make the program a success. “St. Vincent always said, trust God – if you take care of the poor he will take care of you,” she said.

Sister believes her vocation is a miracle that enables her to help people in need. As such, she never worries when funding runs low, when she needs more
volunteers, or when more clients are added to the delivery list. “You have to trust God completely and there’s a great freedom in trusting God,” she said. “God sends us generous volunteers, staff and donors. He does everything and I just kind of channel it to where it has to go.”Her astute mindset today is much different from her upbringing in Chicago, where she was one of five siblings and attended Catholic school. “I hated school so I didn’t do well,” she said. At age 14, her family moved to Albuquerque, New Mexico. She was registered in public school for two years, but frequently ditched class. So her father enrolled her in St. Vincent’s Academy, an all-girls Catholic school in the area. “I graduated high school with `Ds and Fs,” she said.

Regardless of her academic standing, she was determined to pursue a nursing career after she graduated. To her surprise, at age 17, she was accepted at a
Catholic school for nursing studies in El Paso, Texas, operated by the Daughters of Charity. “The nuns in the area were just terrific,” she recalled of the women known as the Daughters of Charity. “They would ask me to go with them to visit the poor, so I would go with them after school. These people lived in these little shacks with tin roofs and dirt floors, and we’d deliver food and clothes.”

It was through this volunteering that she was called to her vocation. She met a five-year-old girl in a pediatric unit. The child had been hit by a car, and suffered a traumatic injury that forced her to learn everything again, from walking to eating. “I worked with her for several months helping her eat and walk,” Sister Alice Marie remembered. The experience was so rewarding, she wanted to do more. “So I spoke to one of the sisters about entering the order because I thought perhaps I should wait until I graduated from nursing school. And she said, ‘God must be calling you now because if he wanted you to wait, he would have waited to call you later’.”

On her 19th birthday, June 15 of 1954, she entered the Daughters of Charity, founded in 1633 by St. Vincent de Paul to serve Jesus Christ in the person of the poor. “I felt very much at home – I know God brought me here,” she said. “My plan was to get married, have six boys and live on a ranch and keep house. God had a different plan for me. God’s ways are not always our ways.”

At the suggestion of a sister, she left nursing school to pursue a degree in dietetics from a college in New Orleans. After her graduation and an internship, she was assigned to a hospital in New Orleans as the director of food services.

Years later she was assigned to the St. Vincent Medical Center as assistant director of its dietary department, and discovered many poor and elderly people who lived in apartments nearby and didn’t eat properly or regularly.

“I’d go to these congregate sites where seniors came together for a nutritious meal; seniors had to stand in line with canes and walkers and service was difficult for many of them,” she said. Determined to make a difference, she made a pot of stew one evening in 1977 for 83 seniors at Precious Blood Parish. That single selfless act led to the St. Vincent Senior Citizen Nutrition Program, serving 100 meals to clients each day. This humble beginning expanded into St. Vincent Meals on Wheels. Today, the program serves areas including Los Angeles, Santa Monica, Culver City, Glendale and El Segundo.

“Our budget this year will be $7.2 million; we do close to 800,000 meals a year,” she said. “Many of those we deliver to are very poor and have little or no funds to donate anything in exchange for their food. We serve everyone regardless of age, religion or ability to pay.” ‘I was hungry and you gave me something to eat…’ We do it for the Lord!

I could never have accomplished all this without the thousands of volunteers, staff, and generous donors who have given and continue to give their time and talents to see that all of our clients are served with such dignity, kindness and care. I am grateful I am a Daughter of Charity of St. Vincent de Paul and St. Louise de Marillac l and that the Lord has chosen me for this ministry. With the grace and strength I pray to continue the service for several more years.”