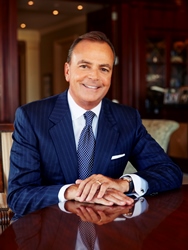 Rick Caruso is nationally recognized for reimagining the way people live, work and shop through his many successful, properties such as The Grove and The Americana at Brand. His real estate development business, Caruso, spans retail, residential and hospitality –The Wall Street Journal refers to Rick asa “retail mastermind.”

What stands out about Caruso is his profound commitment to Los Angeles, the city he has lived his entire life, and his passion for enhancing his community through his roles as a businessman, public servant and philanthropist.

From an early age, Rick’s parents instilled in him the importance of giving back. He recalls their parish and community work, and his uncle’s work as a Franciscan priest and teacher at St. Francis High School. “I try to raise my children the way my parents raised us. They were generous with their time. And that’s what’s important – giving your time. It can be very small things, but you have to lean in and help. You can make a huge difference in other people’s lives. My wife, Tina, and I are confident our children will do the same.”

Rick is involved with a variety of causes steeped in his strong and unwavering commitment to children, education and the Roman Catholic Church. Rick’s beliefs in the importance of investing in children’s education has led him to become a major funder and active volunteer of Para Los Niños (For the Children)—a nonprofit that fosters academic success and social well-being for children in at-risk neighborhoods in Los Angeles

At Rick’s alma mater, University of Southern California (USC), Rick has united his three key areas of advocacy: youth, education and the church. He spearheaded the construction of Our Savior Parish and USC Caruso Catholic Center, which encourages community and faith-building.

Rick and Tina Caruso’s recent endowment to USC is more personal: their daughter, Gianna, suffered hearing loss at a young age, and improved significantly thanks to cutting-edge technology and dedicated, caring doctors. The efforts of these doctors compelled them to endow the USC Tina and Rick Caruso Department of Otolaryngology—Head and Neck Surgery to help others.

The source of Rick’s gratitude is evident as he explains his time attending USC life-changing. “It was a chance to become involved, to grow as a human being. ,” he says with a laugh. “The university aligns so closely with my priorities, whether it’s supporting the medical campus or making sure students have a place where they can practice or find their faith. I don’t think there’s a better university that changes the lives of young people so significantly. They’ve earned my respect, commitment and devotion. .”

After graduating from USC and later, Pepperdine Law, Rick briefly practiced law before his call into retail development. While his nascent business was beginning to take off, Rick was tapped by the Department of Water and Power to be its youngest-ever commissioner. “I admire those who go into public service and love our city. I was 25 years old when I became commissioner and learned a lot about water rights and power issues. I hope they feel I gave a lot in return.”

At first, Rick was reluctant to accept his next position as Los Angeles Police Department’s Police Commissioner. Once Rick learned how quickly crime was rising, that the city was increasingly losing officers in the line of defense, and that the police academy was in a crisis, he felt it was his duty to accept the position and put forth his best efforts to turn the department around and reinvent it. In this volunteer role, Rick saw the city’s crime rate drop to its lowest level since 1950s. He helped restore the department’s size and encouraged the police corps to do the right thing. Trust in LAPD rebounded from the crises of the 1990s. “Public service is about giving back. I now proudly consider myself to be part of the LAPD.”

Rick’s involvement with LAPD led him to become a primary funder for Operation Progress; a life-changing educational program that pairs underserved youth living below poverty line in Watts’ housing projects with LAPD mentors, with the goal of empowering them to become educated, capable, ethical and productive people who will lead, mentor and contribute to society at large.  The program provides these students with scholarships starting in kindergarten through high school and college, and then empowers them to graduate career-ready. Caruso’s commitment to Operation Progress allows the organization to fund 70 scholars today, with a goal of 200 in the short-term: “It’s community policing at its finest and it’s changing the lives of hundreds of families in the poorest parts of Los Angeles,” he says.

When asked about the awards he’s received, Rick offers, “Actions great and small are equally important, so the ‘who’ or ‘what’ isn’t relevant to me. I am very grateful to be acknowledged within my community. That being said, having Archbishop Gomez, a man I deeply respect, recognize my contributions, as well as Pope Francis naming me as a Commander of the Order of St. Gregory the Great – these are honors that will stay with me forever.”

So with his many accolades and successes in life, what truly makes Rick feel complete? “The greatest happiness in my life revolves around my children. When I’m with them, when I receive heartfelt notes from them – that’s really my reward.”