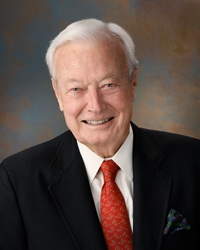 When you meet Nick Weber, your first impression is that he is old school in the best of ways.  Little would you know that old school really means that he was enrolled in 14 different schools by the time he turned 18.  “I was a bit of a renegade,” he admits with a laugh.  “Some schools took me back twice such as Good Shepherd, Notre Dame and Villanova Prep.”

The attack on Pearl Harbor was one of the reasons that Nick, a Los Angeles native from Hancock Park, ended up also going to school in Niagara Falls, NY.  His mother was nervous about the recent airstrikes in Hawaii, fearing Los Angeles could be a target so they briefly left California to be with her family in NY.

Once he graduated from high school, Nick volunteered for the army.  It was an in-between time for soldiers given that the Korean War had ended and Vietnam hadn’t started.  He signed up for the transportation corps to work on landing craft since being mechanical was his strong suit. But, what the Army really needed were soldiers with administrative skills.  Nick was sent to Virginia.

Two years later, Nick attended the University of San Francisco as a business major, then married his wife Patricia Doud and entered the family company Weber Showcase and Fixture.

The Weber Company’s history is Americana at its best.  There were 17 Weber children born in Switzerland, 12 came to the US and eight ultimately immigrated to California.  Carpenters by trade, they created bank and store fixtures but with World War II, the factory was retooled, churning out products for the war effort, anything and everything the country needed.

Ultimately, the company was sold, but Nick decided to buy his division, which specialized in warehousing and transportation.  Today that company is Weber Logistics, operating 12 distribution centers plus a large transportation department servicing the western US. The way Nick runs his company is hands-on, “I manage by sight and sound,” he says.  “I like looking at people in the eye when I walk through the warehouses. The way I treat people is how I was taught in Catholic school.  Employees are people.  Everyone is a person and should be treated as such.”

Fifteen years ago, the Webers moved from Los Angeles to Santa Barbara after being an integral part of the LA community, devoting time to St. Paul the Apostle School and Church, the Rotary Club of America and the Catholic Education Foundation for over 40 years.  A Knight of Malta, Nick was also honored as a Knight Commander of St. Gregory the Great.

While still continuing to be active in the Los Angeles Archdiocese, Nick immersed himself in Santa Barbara life, devoting time to the Music Academy of the West, the Cottage Hospital, Our Lady of Mt. Carmel Church and Notre Dame School of Santa Barbara. Being involved in these institutions is not surprising given that Nick explains that, “I am happy about two things—being born a Catholic and having a natural love for classical music.”

In the Santa Barbara Foundation’s The Common Good, Nick spoke about his long-standing commitment to the communities in which he lives.  He will never forget the night when he attended a fundraising event at St. Paul the Apostle School in Westwood, “One of the speakers described philanthropy as rewarding and fun. And he was right. There are so many people who need help. Through our philanthropy, we found that the more you do, the more fun it is.”

A big believer in Catholic education, Nick is most passionate about his work at Notre Dame School where two of his four daughters volunteer. “There is a real need for community schools.  From Carpinteria to Goleta, there are only three Catholic schools and Notre Dame is the only one in Santa Barbara.  It’s not a wealthy parish so it’s important to support it and the community it serves.”  Although, Nick continues to see areas of opportunities to improve, he is pleased with the refurbishing of the campus by the Shea Foundation and increased enrollment. “I’m hoping neighboring parishes including the Santa Barbara Mission will support Notre Dame as well.”

In his self-effacing way, Nick shared how his family gave back and, in his mind, the Cardinal’s Award really honors them and their good works. “The more I think about it, the more overwhelmed I am.  I really am receiving it on behalf of my family, brother, wife and sisters.  I don’t look at it as if it’s about me.”