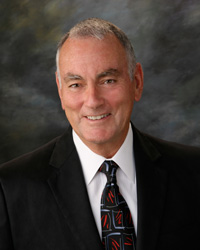 Jim O’Connor has taken the prayer of St. Francis to heart, especially the line “it is in giving that we receive.”

The second oldest of five, Brooklyn-born, Vietnam veteran, longtime Math teacher and coach has been dispensing lessons to his students for nearly five decades. He was a graduate of St. Bridget Grade School and Brooklyn Technical High School. After high school, he worked for The Port of New York Authority as an electrician for three years before joining the Navy. He was stationed on the USS Enterprise as an electricians mate and served two tours in Viet Nam. He returned to work for The Port of Authority and started college. It took him six years to get through college because he was working for most of those years. At age thirty, he finally earned a degree in electrical engineering from CCNY. He feels that this is part of the reason he is tough on his students; he doesn’t want them to make the same mistakes that he did and take so long to get a degree. His work for Hughes Aircraft as an engineer in the satellite communications division brought him to California before leaving a lucrative career for one in education. The enjoyment he experienced from being a summer camp counselor, youth coach, and tutor was instrumental in this decision. “I always knew I wanted to be a teacher.”

He has taught at St. Francis High School in La Canada and Harvard-Westlake School in Studio City since the mid-70’s. Known as a stern taskmaster in the classroom he has taught most high school mathematics courses for thirty nine years and presently teaches AP Calculus AB. He feels you need to be in complete control to be a good teacher and “With 25-30 teenage boys in a class, you need to be tough.” On the athletic fields, he coached football for twenty years and baseball for twelve years.

As if that form of giving was not enough, twenty-six years ago he accepted the invitation of a friend to give blood at Children’s’ Hospital of Los Angeles. “I think they put something else back with my blood, because I started getting strong urges to donate again,” he joked. These urges culminated in his donation of 74 gallons of blood and platelets; for those not fortunate to have had him as a Math teacher, that’s 592 pints. However, it does not end there because it was during his blood donation visits that Jim took notice of volunteers working with the children. So he began volunteering his time in the playroom. Today, this tough guy spends two to three days a week volunteering. He feeds and gently cradles newborn infants, happily plays with youngsters, sadly some of them are abused, and offers a loving presence to children whose parents, for whatever reason, are unable to visit.

I’ve had babies throw up on me, spit up on me — no big deal,” grins the lifelong Catholic. “But to do this kind of service makes me feel good. I think it is more for me than for them. Babies can’t do anything; they are so dependent on you. I know that my blood pressure goes down when I hold them.” In his words, “The rewards of working with babies are simple, but powerful.” Children’s’ Hospital is a place where he does not need to be tough and it has allowed him to be a temporary father / grandfather to children in need of one.

Jim has also initiated an annual blood drive at St. Francis High School so his students could experience the Franciscan virtues they were being taught; values like compassion, humility, service and goodness. In addition, he arranged for several terminally-ill children to be honorary team captains at the school’s football games. Seeing them interact with a team, going out to mid-field for the coin toss and receiving standing ovations was particularly meaningful for Jim.

He is also aware that he has gained more from his experience than he has given. “My involvement at Children’s’ has opened a whole new world for me. And now, it’s become a way of life.”