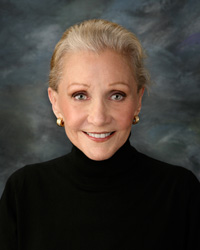 As a wife, mother, grandmother, teacher and now businesswoman, Gretchen Wayne has lived a very rich and fulfilling life. Her latest project, supervising the worldwide distribution of Batjac films, is a culmination of a life-long dream of her husband.

For the past few years, Mrs. Wayne has been managing virtually every aspect of the major restoration of these films, shepherding the process of bringing in to market John Wayne classics like “The High and the Mighty,” “Hondo,” McLintock” and the “Green Berets,” all of which are part of the Batjac titles released by Paramount Home Entertainment and Warner Bros. Pictures.

“My husband Michael’s dream was to bring back to the public one of John Wayne’s most popular films, ‘The High and the Mighty,’ which had been out of circulation for half a century. The film negative had severe water damage and several of the reels of film were missing, but Michael knew that someday the technology would exist to restore the film to all its glory. Also “Hondo” which was originally filmed in 3-D in 1953, was restored and selected as the opening film for the Cannes Classic Film Festival in 2007 and played too sold out audiences. It was a privilege to complete Michael’s dream.”

Gretchen Wayne and her sister Kay Avalon grew up in Toluca Lake, California. Her father was a businessman and her mother a homemaker. Gretchen and Michael were married in 1958 and Michael Wayne became President of Batjac Productions in 1961. He shared his dreams, ideas and hopes for the company with her, always seeking her opinion on every element of production from scripts to film editing. Meanwhile, she was raising five children, all of whom she’s very close to and sees almost daily.

Her background is as an English teacher, but after marrying her high school sweetheart, she spent her time with family matters and chairing various school projects with which her children were involved. She always found time for her charitable endeavors as well, and as a Member of the Board of Directors of the John Wayne Cancer Institute Women’s Auxiliary, she helped to raise over $14 million dollars for cancer research. She also served as a Member at Large of the Board of the Los Angeles branch of The American Ireland Fund. Additionally, she served as President of the Juniors of Social Service Auxiliary, helping to fund the work of The Sisters of Social Service. She was also a member of the fundraising committee for the Cathedral of Our Lady of the Angels, a Board Member of Paulist Productions and Holy Family Adoption Services. Michael Wayne always supported and encouraged her charitable activities. In 1999 Gretchen and Michael were honored with The Caritas Award from the Irene Dunne Guild of Providence St. John’s Health Center, joining a list of past honorees including Nancy Reagan, Jimmy Stewart and Sir Anthony Hopkins.

Since taking over Batjac full time, Gretchen has taken on many new obligations, and her background as an educator and parent have served her well. “I had the sense to know what I didn’t know,” she says, so she’s ensured that the team she’s put together to work on these many classic films will make them look even better than ever. “As a teacher, you know that it’s about learning from your students and then teaching. As a parent, you know it’s about listening to your children and then acting. As an executive, it’s about learning, teaching, and then acting.”

“Anything and everything that I have been able to accomplish was made possible by the support of my husband who followed his parents’ example of philanthropic endeavors. Michael was Vice Chairman of the Board of Trustees of the Motion Picture & Television Fund, Board of Directors of The Industry Health Network and Founder and Chairman of the Board of the John Wayne Cancer Institute at Providence St. John’s Health Center. Michael truly reflected his Jesuit education – a man for others.”