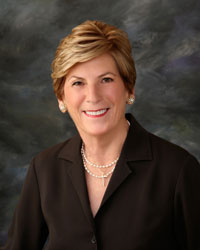 It doesn’t necessarily take a degree in child psychology to offer comfort to the sick (the malades) in the baths of Lourdes. Or to participate in the Christ Child Society, making layettes and raising money for young mothers and their newborns. Or to launch an organization to support your son’s high school, long after that son has graduated. What it does take is a desire and commitment to serve others. For Bitsy Hotaling — who does happen to have a degree in child psychology — that desire to serve has been a part of her life, and a source of her joy, as long as she can remember.

“Mother Teresa once said, ‘Like Jesus, we belong to the world, living not for ourselves but for others; the joy of the Lord is our strength,’” she says reflectively. “ I have always liked reaching out, helping out whenever and wherever I am needed.”

That was a lesson learned from her Catholic father and Presbyterian mother when she was growing up in the Windsor Square area west of downtown, attending St. Brendan Parish. “Mom and Dad were community-minded people, always doing something for others,” she says, “and I guess I learned from them.”

She attended Marlborough School, and graduated from UC Berkeley with a degree in child psychology, “hoping to work in some capacity with children.” Which, in fact, she did, after marrying Dick Hotaling in November 1955 (Cardinal McIntyre performed the ceremony) and raising a family — daughters Elita, Marsi, Elizabeth and son George — and working on parish and school fundraisers.

In 1985, with the children becoming young adults, Bitsy and Dick moved to Pasadena, joined Holy Family Parish and “jumped in with both feet,” says Bitsy. Soon, with the support and friendship of Msgr. Clem Connolly (who had come as pastor in 1984), the Hotalings were equally as busy as they’d been at St. Brendan’s, if not more so, with Bitsy chairing the garden ministry and serving as lector and Eucharistic Minister (commissioned as such by her pastor during a Holy Land pilgrimage). And for 19 years, the Hotalings hosted a gourmet dinner for 10 — a prize in the annual parish auction — that raised $85,000.

Active outside the parish, Bitsy connected with Christ Child Society Pasadena, a local chapter of the national organization of women who make layettes for newborns and raise money for schools.

“I joined because I knew I’d meet women I’d have something in common with, a love for children,” smiles the grandmother of 12, who still volunteers reading to the second graders at St. Andrew’s School. “Maybe my child psychology education entered into this. But it’s a very rewarding involvement.”

In 1994, the Hotalings’ lives changed dramatically with an invitation to join the Order of Malta, which has led to many pilgrimages to Lourdes.

“We knew some people who belonged to the Order, and we had been on pilgrimages — but never on one like this,” she recalls, with awe. “But what a wonderful experience it has been, because we care for 50 Malades that we bring from the United States and we are with them for all the Malta functions throughout the week (Mass, Annointing of the Sick, Reconciliation, Bathing of the feet, Prayer in the Grotto, the Baths, etc.) They become our friends and we stay in touch with them when we return to the United States.”

Currently in her second year as president of the Order of Malta’s Los Angeles Location, Bitsy is involved in multiple activities, which include retreats and outreach ministry in the Los Angeles area, and serves on its Hospitaller Board which oversees distribution of funds.

She is also happy to be involved at Loyola High School, years after her son graduated. “I had been president of the Loyola Mothers Guild,” she says. “ When George graduated, it was hard to let that connection with the Loyola community go; I just couldn’t walk away.”

Neither could some her fellow mothers-of-graduates, who approached Jesuit Father Patrick Cahalan, Loyola’s president, and asked if they could raise money for a scholarship. “We kept at him until he said yes,” laughs Bitsy, mindful of one of a Jesuit friend’s admonition that “you make more friends with honey than with vinegar, so kill them with kindness.”

Thus was founded the St. Ignatius of Loyola Guild, comprised of alumni mothers, which raised $5,000 its first year, and continues to raise scholarship money through annual luncheons and other activities. “It’s a great group of women,” Bitsy notes proudly.

A Dame of St Gregory and a Lady of the Holy Sepulchre she has also served on the boards of Mater Dolorosa Retreat Center and the Little Sisters of the Poor. Bitsy enjoys gardening, traveling, spending time with her grandkids (“I’ll play any card or board game they want”), and hosting Super Bowl parties, complete with an In ’n Out truck parked out front.

“Dick and I have always been active in life,” she says. “We don’t sit around, and that’s something we’ve tried to pass on to our children. And having watched us for so long, they’ve followed through; all of them are involved in their parishes, their children’s schools and their community. Dick and I feel very fortunate and very blessed to have each other (57 years) our family and our faith.