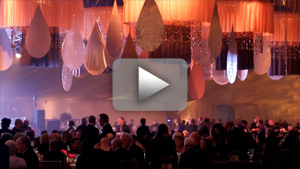 On March 11, 2017, the Cardinal’s Awards Dinner returns to the International Ballroom of the Beverly Hilton Hotel. This iconic location was purchased by Conrad Hilton in 1955. Mr. Hilton, a longtime supporter of Catholic religious sisters, sold the property in 1987 to Merv Griffin, another faithful Catholic who welcomed the Cardinal’s Awards to his hotel. In 2003 the hotel was sold to Beny Alagem, co-founder of Packard Bell Electronics.

Since 1961, the Beverly Hilton has been home to the Hollywood Foreign Press Association’s star-studded event, the Golden Globes. Our version of the Golden Globes will honor the extraordinary gifts of Bill Ahmanson, Rick Caruso, Gretchen Willison, Letty Ibarra and Nick Weber……